Where and How is AI Actually Being Adopted

Summary:  Adoption of AI/ML by larger companies has more than doubled since last year according to these survey results from McKinsey and Stanford’s Human-Centered AI Institute.  This new data gives us a much better idea of which global regions and which industries are adopting which AI/ML techniques.

We know we’ve entered the era of exploitation of AI/ML but the $64 Billion question is how far along the curve are we and who exactly has implemented and will implement?  By the way, $64 Billion is a reasonable estimate of global market spend in roughly four or five years, about 6 times where we are today.  And that investment should yield about $4 Trillion in business value in that same time frame according to Gartner.

Still, trying to point a finger at any particular company and determine to what extent they’re using AI/ML, what types they’re using, and in what functions remains pretty much a crap shoot.

The best data we’ve seen so far shows that between 1/5th and 1/3rd of larger companies are implementing AI/ML ‘at scale’, meaning they’re putting on a full court press to use this as a competitive differentiator.  Does that mean that roughly 75% of companies are getting left behind?  And what about mid-size companies?

Now we have some new data sources that are both a little more current (surveys in 2018) and a little more granular.  For this we have to thank the good folks at McKinsey for their AI Adoption Survey, and the folks at Stanford’s Human-Centered AI Institute who for the last few years have been publishing the encyclopedic ‘AI Index’.  The 2018 AI Index brings together stats from a huge variety of sources including this McKinsey study to let us see the progress of AI along its many axes.

What AI/ML Applications are Being Used in What Processes?

The following charts are drawn from both reports but are all based on the McKinsey survey data from February 2018 and represents the responses of 2,135 participants globally.  In each chart the values in bars are the percentage of respondents who indicated they utilize the particular technique in at least one area of their business.  The underlying data also indicates where each technique is being used more widely if you want to drill down. Data for other regions appears in the source reports with surprising similarity in adoption rates and techniques.

What Business Processes Are Seeing the Biggest Impacts?

As expected at this stage of adoption, projects appear to be selected based on their expected business value, and that value varies significantly by industry. 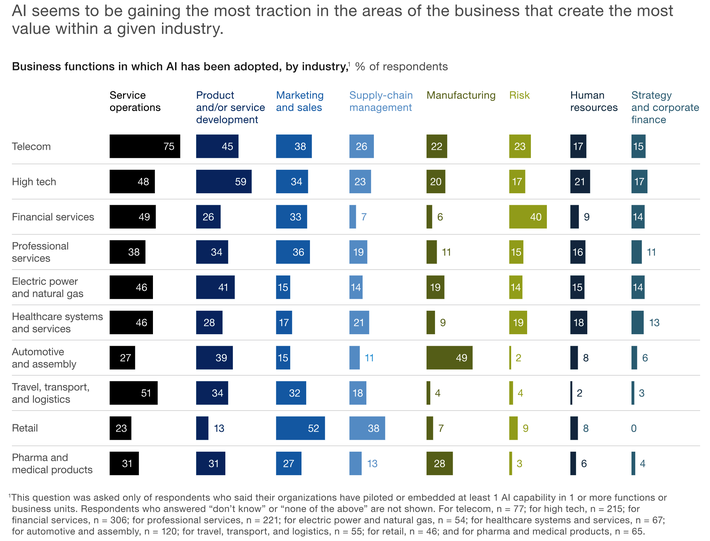 There are other fairly obvious correlations in the data.  For example,

Three of the top four reasons holding back adoption are all related to leadership and the lack of an AI strategy.  Again this shows that this stage of adoption seems to be driven by targets of opportunity rather than a well-planned organizational commitment.

The second of four reasons is familiar to all of us, the difficulty in hiring or developing the talent necessary to drive these projects. How Much Can We Rely on this Data?

McKinsey and the folks at Stanford’s Human-Centered AI Institute are top notch thought leaders in trying to quantify adoption.  Still, before relying on these seemingly precise values in your decision making, it’s best to remember the potential pitfalls in all types of surveying.

The study unfortunately doesn’t show how many different techniques are being used in a single company.  For example, if a large company uses a chatbot somewhere in their business are we really going to give them credit for AI adoption?  This probably isn’t the case but the study doesn’t resolve the question.

I’m always on the lookout for any competent quantitative measures of adoption.  Across large and medium size organizations that are the most likely adopters I suspect these survey results come in on the high end of reality but any insight is valuable.

About the author:  Bill is a Contributing Editor for Data Science Central.  Bill is also President & Chief Data Scientist at Data-Magnum and has practiced as a data scientist since 2001.    He can be reached at:

LOKD: World’s first secure phone based on Machine learning and Artificial Intelligence technology to be Present at MWC Barcelona 2019