Previously, I tackled the Gambler’s Ruin problem using conditional probability and difference equations as well as visualising the simulations of the problem in a random walk style using Python/Pygame. This can be found here: https://www.datasciencecentral.com/profiles/blogs/gambler-s-ruin-si….

This article has 5 sections:
0- Introduction: Introduction to a process dependent on two random variables
1- The Problem: Setting up the wheel of fortune problem
2- The Solution: The solution to the wheel of fortune problem
3- Finding the probability p from observations: Theory for applying Bayesian Inference to the problem
4- Simulations: Simulations of the problem and the application of the theory to infer a posterior probability distribution for a parameter

The full code (Jupyter Notebook) and theory can be found here: https://github.com/TanselArif-21/WheelofFortune

Additionally, suppose the probability distribution of the slots is known but not that of the wheel. Given observations on the history of the games played and the results of those games, it is possible to make some guess on the probability distribution of the wheel that would most likely result in such data. We will approach this part of the problem by thinking in a Bayesian context.

Below, I frame a similar problem with a wheel and coin flips to simplify the work a little.

Depending on the number you get from the wheel, you are allowed to flip a coin that many times and record the number of heads you get. The coin is biased towards heads with a probability of 7/10 of getting a heads.

What is the probability distribution of the number of heads if you play the game?

In particular, the probability generating function for W (representing the value obtained from the wheel) is:

And the probability generating function for X is: Allowing the derivation of the probability generating function for Y using: Resulting in the following probability distribution for Y – the total number of heads:

FINDING THE PROBABILITY p FROM OBSERVATIONS 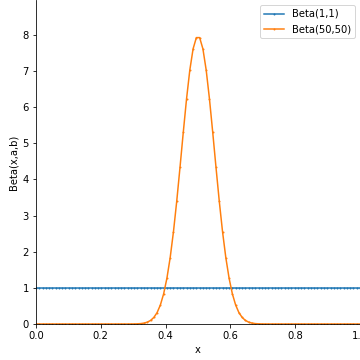 where the parameters of the distribution have been updated using the observed values for Y and W. Note that even if the data for the outcomes from W is not accessible to us, we can still estimate the sum above using the expected value for W as N E[W]. This posterior distribution using values from the simulation (code given in the next section) can be seen in the image below to accurately estimate p as 0.2 (the orange line estimates the parameter in the Beta distribution without seeing data from W whereas the blue line uses actual observed data): Below, we can see a simulation of 10000 runs through the problem:

Below we can utilise the theory in the previous section to derive the probability p from the data using the Beta distribution:

# Create a numpy array of the posterior distribution using actual observed values of W
y = np.array([stats.beta.pdf(i,1+y_sum,1-y_sum+w_sum) for i in x])

Supermarkets of the Future: Deploying AI in Your Grocery Store | by ITRex Group | May, 2021

How Can You Build Customer Trust in 2021?