Virtualized network functions: The cloudification of telecoms leading to a new class of applications

The Cloudification of the Telecoms market

Last week, Nokia announced 10,000 jobs lost worldwide. Telecoms is a cyclical business with the G cycles (roughly spanning seven years) ex 3G, 4G etc – driving the ups and downs in employment. However, there is more at stake here because the Telecoms industry is fundamentally changing.

Nokia also said that it planned to invest in cloud and digital infrastructure and announced three partnerships with the leading Cloud providers i.e. AWS, Azure and GCP.

Broadly, these partnerships are designed to use Nokia’s RAN (Radio Access Networks) and Edge technologies with the Cloud for 5G networks. With AWS, Nokia will work with AWS outposts.  With Azure, they will integrate with Azure Private Edge Zone. With GCP, Nokia will work with Google Cloud Anthos These partnerships demonstrate a wider change in the value chain because Nokia is a traditional Telecoms infrastructure vendor and its primary customers/ partners are the Telecoms network operators.

We can see it as a ‘Cloudification’ of telecoms networks – a trend which has implications for next generation applications development.

The origins of the cloudifications of telecoms lie in another obscure acronym EPC –  Evolved packet core. EPC brought internet technology and packet switching to telecoms. Traditionally, GSM  technology in telecons was based on circuit switching. GSM evolved to GPRS in early 2000s which introduced packet switching. This was followed by 3G (mid to late 2000s) and 4G beyond 2012 which continued the packet switching trend bringing the telecoms network closer to the Internet. Impressive as these changes were, they mostly impacted the network layer and were not very visible for most services / applications. But building on the foundations of EPC, a more disruptive change was taking place called Network functions virtualization (NFV). NFV will lead to a new class of applications – driven by the Cloud. Hence, the significance of the Nokia partnerships with the cloud providers.

The idea of network function virtualization is familiar to the Cloud. Network functions virtualization (NFV) is a network architecture concept that uses IT virtualization technologies to virtualize classes of network node functions into building blocks that may In turn, be chained together to create communication services. In practise, A VNF may comprise of one or more virtual machines or containers running processes on standard (i.e.  non-proprietary) hardware. A number of network functions can be implemented as NFVs – ex load balancers, firewalls etc. In the telecoms world, NFV has origins in 2012 with the ideas of SDN (software defined networking) which led to the creation of the Network Functions Virtualization (NFV) Industry Specification Group (ISG)  within the European Telecommunications Standards Institute (ETSI).

The concept of NFV subsequently expanded to a distributed architecture which means that the function need not be located in the data centre. It could even be located inside the customer’s premises.

One example of such new architectures is Azure Edge Zones

Azure Edge Zones are local extensions of Azure that are ideal for solving compute, storage, and service availability issues by allowing you to provide experience-driven, edge computing resources closer to your customers—using the technology that you already have. Azure Edge Zones are available through Azure, with select carriers and operators, or as private customer zones. 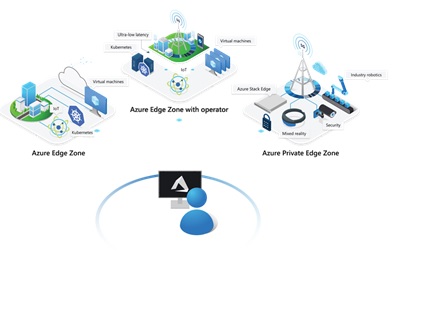 The telecoms networks are now increasingly operating with the philosophy of the Cloud. The technological changes due to EPC and VNF lead to business model changes (on demand services which can be orchestrated using software and commodity hardware). Thus, we are seeing the transformation of telecoms networks (which are moving from fixed-function hardware to a more agile, cloud-like architecture). An entirely new class of applications will emerge that span the telecom and cloud worlds. These applications will be needed for autonomous vehicles and other new services. I follow these trends from the cloud side.