Friday the 13th of March: day one of the Dutch corona lock-down. I was almost out the door to deliver day 4 of a data science product owner training at the University of Amsterdam, but somehow hadn’t connected the dots that the university closings announced the previous evening meant my training was also cancelled. By force of habit, I glanced at my emails and saw that the full-day training I was scheduled to teach was also, most definitely, cancelled.

And so began preparations for what would be my first virtual data science training (one of many adjustments during the lock-down).

I must have spent as much time preparing the technology for that first virtual training as I did actually giving the training.

By now we’ve all been subjected to remote meetings using the myriads of available conferencing tools. I’ve developed a love-hate relationship with many of them. The University of Amsterdam happens to use Zoom, so I started reading manuals and preparing my setup.

The next extremely trivial but excessively annoying challenge was my video background. Real or artificial?

I quickly realized a fake background made my head also look fake (surprise). After spending much too much time on this, I found an artificial background that worked for me (No, I’m not showing it here, sorry)

Even cooler, Powerpoint could be convinced to add sub-titles as I spoke. Participants from foreign countries loved that (being from Pennsylvania, I tend to talk fast).

When I shared my screen in Zoom, I would select ‘advanced’ and then share just the portion of the speaker’s page, now on the external monitor, that had the presentation screen. (Yellow boxed area on photo below) 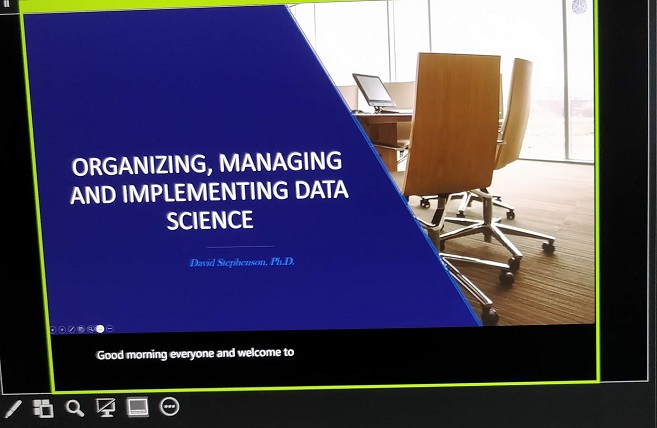 We did a practice run a few days ahead of the training, along with my (also-locked-down) university colleagues.  The training day started out smoothly, except one participant missed the training entirely because of an outage in the web version of Zoom.

Zoom has a nice breakout room feature, where participants can work together in small groups. Great feature, except it was just at the point when I had started these groups that I lost my connection and was dropped from the training I was giving. When I re-entered two minutes later, I no longer had access to the rooms my participants were in, so I’d lost contact with my participants

I was wracking my brain how to retrieve my lost participants when suddenly a man in the main conference room started talking to me, explaining how he had just checked on each breakout room and had agreed with them all that they would wrap up the discussions and return to the main room in 5 minutes. Completely surprised, I assumed this was some university zoom administrator who had taken over. In fact, zoom had automatically assigned one of the training participants as the new host in my place. This participant had taken over responsibility for supervising the group after I was dropped for two minutes.

Virtual training presented some notable advantages. For me, it was easier to reference my notes when needed (I turned my camera off while presenting slides). It was also much easier for participants to share their screens with the group after breakout sessions, something I always struggled with during in-person training.

Participants also had the advantage of being able to join without leaving home, and I’m fairly certain the daughter of a participant joined the training from her personal phone at one point (on mute, of course)

At this point, I’ve taught four virtual training during this lock-down. Although we were initially unsure how it would work, I have to say that I’m quite happy with how they went. Participants were able to freely ask questions and steer the discussions towards areas most relevant to their work.

With the right preparation and with a conscious effort to invite questions and solicit audience participation, participants still benefit from the live, interactive dynamic that differentiates these trainings from the static content available in books or pre-recorded online courses.

I don’t know what the future mixture of on-site vs virtual training will be for us all. I know my upcoming sessions will be virtual for the next few months.

Oh, and If you’d like more information on training I’m involved with, visit https://dsianalytics.com/data-science-trainings/.