Docker is a popular platform-as-a-service (PaaS) solution for Linux and Windows designed to make it easier for developers to create, test, and run their applications in a loosely isolated environment called a container.

According to the latest research Intezer shared with The Hacker News, an ongoing Ngrok mining botnet campaign scanning the Internet for misconfigured Docker API endpoints and has already infected many vulnerable servers with new malware.

While the Ngrok mining botnet is active for the past two years, the new campaign is primarily focused on taking control over misconfigured Docker servers and exploiting them to set up malicious containers with cryptominers running on the victims’ infrastructure.

Dubbed ‘Doki,’ the new multi-threaded malware leverages “an undocumented method to contact its operator by abusing the Dogecoin cryptocurrency blockchain in a unique way in order to dynamically generate its C2 domain address despite samples being publicly available in VirusTotal.” 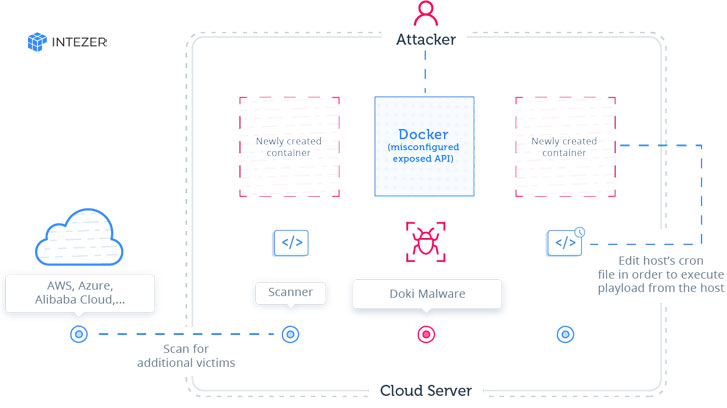 According to researchers, the malware:

“The malware utilizes the DynDNS service and a unique Domain Generation Algorithm (DGA) based on the Dogecoin cryptocurrency blockchain in order to find the domain of its C2 in real time.”

Besides this, the attackers behind this new campaign have also managed to compromise the host machines by binding newly created containers with the server’s root directory, allowing them to access or modify any file on the system.

“By using the bind configuration the attacker can control the cron utility of the host. The attacker modifies the host’s cron to execute the downloaded payload every minute.”

“This attack is very dangerous due to the fact the attacker uses container escape techniques to gain full control of the victim’s infrastructure.”

Once done, the malware also leverages compromised systems to further scan the network for ports associated with Redis, Docker, SSH, and HTTP, using a scanning tool like zmap, zgrap, and jq.

Doki managed to stay under the radar for more than six months despite having been uploaded to VirusTotal on January 14, 2020, and scanned multiple times since. Surprisingly, at the time of writing, it’s still undetectable by any of the 61 top malware detection engines.

The most prominent container software has been targeted for the second time in a month. Late last month, malicious actors were found targeting exposed Docker API endpoints and crafted malware-infested images to facilitate DDoS attacks and mine cryptocurrencies.

Users and organizations who run Docker instances are advised not to expose docker APIs to the Internet, but if you still need to, ensure that it is reachable only from a trusted network or VPN, and only to trusted users to control your Docker daemon.

If you manage Docker from a web server to provision containers through an API, you should be even more careful than usual with parameter checking to ensure that a malicious user cannot pass crafted parameters causing Docker to create arbitrary containers.

Spy agency: Artificial intelligence is already a vital part of our missions

Blockchain lags behind other technologies in finance adoption for now, says Broadridge

How 3D Cuboid Annotation Service is better than free Tool? | by ANOLYTICS