Vitalik Buterin (https://vitalik.ca) conceptualized Ethereum (https://ethereum.org) in November, 2013. The core idea proposed was the development of a Turing-complete language that allows the development of arbitrary programs (smart contracts) for blockchain and Decentralized Applications (DApps). This concept is in contrast to Bitcoin, where the scripting language is limited and only allows necessary operations.

The EVM is a simple stack-based execution machine that runs bytecode instructions to transform the system state from one state to another. The EVM is a Turing-complete machine but is limited by the amount of gas that is required to run any instruction. This means that infinite loops that can result in denial-of-service attacks are not possible due to gas requirements. The EVM also supports exception handling should exceptions occur, such as not having enough gas or providing invalid instructions, in which case the machine would immediately halt and return the error to the executing agent.

The EVM is an entirely isolated and sandboxed runtime environment. The code that runs on the EVM does not have access to any external resources such as a network or filesystem. This results in increased security, deterministic execution, and allows untrusted code (code that can be run by anyone) to be executed on Ethereum blockchain.

As mentioned earlier, the EVM is a stack-based architecture. The EVM is big-endian by design, and it uses 256-bit-wide words. This word size allows for Keccak 256-bit hash and ECC computations.

There are three main types of storage available for contracts and the EVM:

The storage associated with the EVM is a word-addressable word array that is non-volatile and is maintained as part of the system state. Keys and values are 32 bytes in size and storage. The program code is stored in virtual read-only memory (virtual ROM) that is accessible using the CODECOPY instruction. The CODECOPY instruction copies the program code into the main memory. Initially, all storage and memory are set to zero in the EVM. 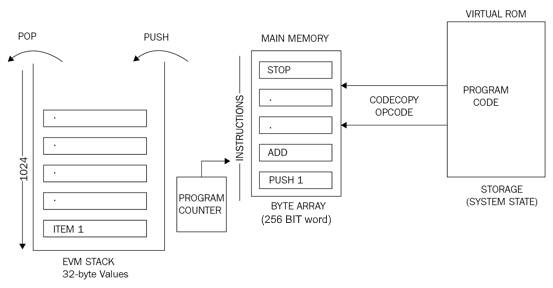 The preceding diagram shows an EVM stack on the left side showing that elements are pushed and popped from the stack. It also shows that a program counter is maintained, and is incremented with instructions being read from the main memory. The main memory gets the program code from the virtual ROM/storage via the CODECOPY instruction.

EVM optimization is an active area of research, and recent research has suggested that the EVM can be optimized and tuned to a very fine degree to achieve high performance. Research and development on Ethereum WebAssembly (ewasm)—an Ethereum-flavored iteration of WebAssembly—is already underway. WebAssembly (Wasm) was developed by Google, Mozilla, and Microsoft, and is now being designed as an open standard by the W3C community group. Wasm aims to be able to run machine code in the browser that will result in execution at native speed. More information and GitHub repository of Ethereum-flavored Wasm is available at https://github.com/ewasm.

Another intermediate language called YUL, which can compile to various backends such as the EVM and ewasm, is under development. More information on this language can be found at https://solidity.readthedocs.io/en/latest/yul.html.

The execution environment can be visualized as a tuple of ten elements, as follows:

The execution results in producing the resulting state, the gas remaining after the execution, the self-destruct or suicide set, log series, and any gas refunds.

The machine state is also maintained internally, and updated after each execution cycle of the EVM. An iterator function (detailed in the next section) runs in the EVM, which outputs the results of a single cycle of the state machine.

The machine state is a tuple that consists of the following elements:

The EVM is designed to handle exceptions and will halt (stop execution) if any of the following exceptions should occur:

Machine state can be viewed as a tuple, as shown in the following diagram: 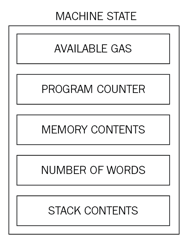 The iterator function mentioned earlier performs various vital functions that are used to set the next state of the machine and eventually the world state. These functions include the following:

The EVM is also able to halt in normal conditions if STOP, SUICIDE, or RETURN opcodes are encountered during the execution cycle.

In this article we saw a detailed introduction to the core components of the EVM. Learn more in Mastering Blockchain, Third Edition by Imran Bashir.

On What Emerging Social Media Should You Spend Your Budget?