Some Fun with Gentle Chaos, the Golden Ratio, and Stochastic Number Theory

So many fascinating and deep results have been written about the number (1 + SQRT(5)) / 2 and its related sequence – the Fibonacci numbers – that it would take years to read all of them. This number has been studied both for its applications (population growth, architecture) and its mathematical properties, for over 2,000 years. It is still a topic of active research.

I show here how I used the golden ratio for a new number guessing game (to generate chaos and randomness in ergodic time series) as well as new intriguing results, in particular:

We use the following concepts in this article: 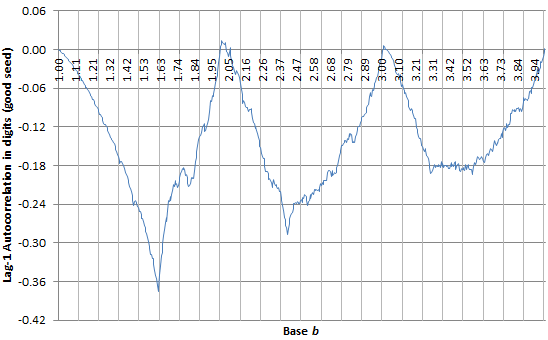 3. Strange Facts and Conjectures about the Rabbit Constant

The rabbit constant R = 0.709803442861291 … is related to Fibonacci numbers (and thus to the golden ratio) used to model demographics in rabbit populations. It is typically defined by its sequence of binary digits in the ordinary binary numeration system (a special case of b-processes with b = 2) and it has an interesting continued fraction expansion, see here.

We use here a different approach to construct this number, leading to some interesting results. First, let us introduce a new constant. We call it the twin rabbit constant, and it is denoted as R*.

The twin rabbit constant R* is built as follows:

The rabbit constant R is built as follows, using the same sequence x(n):

Here are a few surprising facts:

It would be interesting to study the more general case where b is any positive irrational number, constructing twin numbers using the same methodology, and analyze their properties.  Some of the candidate numbers include those listed in the Beatty sequence. Here we only focused on b = (-1 + SQRT(5)) / 2. As a general result, the binary digits of the twin numbers generated this way, can never generate a good seed in any base, because they are too strongly auto-correlated.

We use this technology in our generic number guessing game. Our gaming platform features pre-computable winning numbers, and payout based on the distance between guesses and winning numbers. This system is described here, and I will present it at the INFORMS annual meeting in Seattle in October 2019. It mimics  a stock market or lottery game depending on the model parameters. At its core, among many sequences, we also use the golden ration b-process x(n) described in section 3.2 in my article on randomness theory. Here b = (1 + SQRT(5)) / 2. Of course, we start with a good seed.

In order to make the number guessing process more challenging, we de-correlate the digits. For this purpose, we consider two options.

This option consists of de-correlating the sequence x(n). The first step is to map x(n) onto a new sequence y(n), so that the new equilibrium distribution becomes uniform on [0, 1]. This is achieved as follows:

Now the y(n) sequence has a uniform equilibrium distribution on [0, 1]. However, this new sequence has a major problem: high auto-correlations, and frequently, two or three successive values that are identical (this would not happen with a random b, but here b is the golden ratio — a very special value — and this is what is causing the problem.)

A workaround is to ignore all values of x(n) that are larger than b – 1, that is, discarding y(n) if x(n) is larger than b -1. This is really a magic trick. Now, not only the lag-1 auto-correlation in the remaining y(n) sequence is equal to 1/2, the same value as for the full x(n) sequence with b = 2, but the lag-1 auto-correlation in the remaining sequence of binary digits (digits are defined as INT(b y(n)) is also equal to zero, just like for ordinary digits in base 2.

Thus, in order to dilute the auto-correlations by a factor b^k, one has to interlace k sequences using the same base b for each sequence, but using k independent good seeds, one for each sequence. Doing so, we are actually working with multivariate b-processes that are not cross-correlated. The same mechanism can be applied recursively to each of the k sequences, eventually resulting in multiple layers of nested sequences (a tree structure) to further reduce auto-correlations. Finally, re-mapping the resulting process may be be necessary to obtain a uniform equilibrium distribution.

Note that if b is an integer, there is no need to de-correlate as the sequence of digits is automatically free of auto-correlations. Also, in that case, no re-mapping is needed as the equilibrium distribution is uniform to begin with.

IT Innovation for Competitive Advantage