The smartphone of Amazon founder Jeff Bezos, the world’s richest man, was reportedly hacked in May 2018 after receiving a WhatsApp message from the personal account of Saudi crown prince Mohammed bin Salman, the Guardian newspaper revealed today.

Citing unnamed sources familiar with digital forensic analysis of the breach, the newspaper claimed that a massive amount of data was exfiltrated from Bezos’s phone within hours after he received a malicious video file from the Saudi prince.

The mysterious file was sent when crown prince Salman and Bezos were having a friendly WhatsApp conversation, and it’s ‘highly probable’ that it exploited an undisclosed zero-day vulnerability of WhatsApp messenger to install malware on Bezos’s smartphone.

The Guardian said it didn’t know what data was extracted from the phone, but the hack happened almost 9 months before an American tabloid newspaper published intimate photos and messages sent by Bezos, disclosing his extramarital affair that leads to a divorce from his wife of 25 years.

Though the tabloid newspaper claimed it was tipped off about the affair by the estranged brother of Bezos’s secret girlfriend, the new evidence suggests, with moderately high confidence, that the leak is linked to the hack of Bezos’s phone. 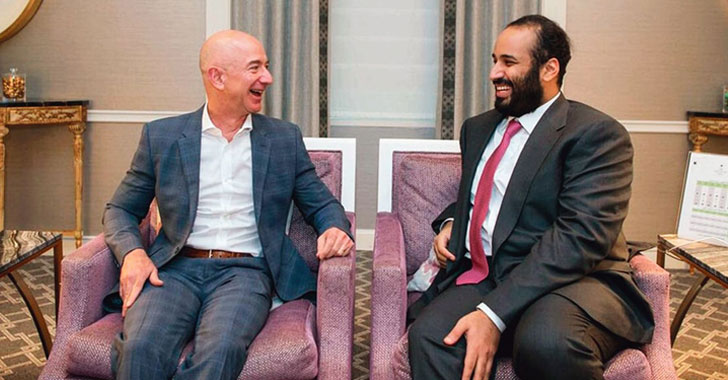 At that time, Jeff Bezos pointed out the business relationship between the tabloid newspaper and Saudi Arabia and also hinted that how furious the Saudis were with him for the Washington Post’s coverage of the murder of its journalist Jamal Khashoggi, a strong critic of the Kingdom’s rulers.

Since Bezos also owns the Washington Post and the CIA claimed that Salman ordered Khashoggi’s assassination, the relationship between the Amazon chief executive and the Saudi government soured immediately after that.

To be noted, Jamal Khashoggi was killed in October 2018, almost five months after the alleged hack of the Bezos’s phone.

Apparently, the new revelation now perfectly aligns the timeline of events as follows:

Meanwhile, Saudi Arabia’s U.S. Embassy, in a tweet, dismissed the Guardian report by calling it “absurd” and asked for an investigation.

“Recent media reports that suggest the Kingdom is behind the hacking of Mr. Jeff Bezos’ phone are absurd. We call for an investigation on these claims so that we can have all the facts out,” The Saudi embassy said.

However, at the time of writing, it’s unclear whether the alleged hack of Bezos’s phone also leaked any sensitive corporate information related to Amazon.

Nearly All Wi-Fi Devices Are Vulnerable to New FragAttacks