Reinforcement Learning: Coming to a Home Called Yours!

I loved playing StarCraft, though I seldom played against other humans (my sons in particular, because they absolutely kick my butt).  But ah, there is finally revenge for “Dad the Data Nerd”, and it’s known as AlphaStar.  AlphaStar was developed by Google’s DeepMind AI group to leverage artificial intelligence (AI) to master the game of StarCraft.

StarCraft is much trickier for AI to master than games like Go and Mario Bros because of its unbounded complexity, continuously-changing gameplay (rather than the distinct events which occur when players take turns), evolving battlefield situations and dependency on constantly tweaking one’s in-game strategy. AlphaStar achieves StarCraft domination using a multi-agent learning algorithm that integrates different advanced analytic algorithms including:

The goal of Reinforcement Learning is for an autonomous “agent” to learn a successful strategy from experimental trial-and-error within the bounds of a certain operational situation.  With the optimal strategy, the agent is able to actively adapt to the changing environment to maximize future rewards while minimizing costs (see Figure 1).

In the blog Artificial Intelligence is not ‘Fake” Intelligence, I discuss how Reinforcement Learning helps software agents take actions in an environment to maximize cumulative rewards while minimizing costs. Reinforcement learning uses trial-and-error to map situations to actions to maximize rewards and minimize costs. Actions may affect immediate rewards, but actions may also affect subsequent or longer-term rewards, so the full extent of rewards must be considered when evaluating the reinforcement learning effectiveness (hint: this is key).

Reinforcement Learning learns by replaying a certain situation (a specific game, vacuuming the house, driving a car) millions of times.  The program is rewarded when it makes a good decision and given no reward (or punished) when it loses or makes a bad decision.  This system of rewards and punishments strengthens the connections to eventually make the “right” moves without programmers explicitly programming the rules into the game.  Yep, Reinforcement Learning is like playing the kids game of Hotter-Colder (except I don’t remember punishment being part of that game).

As an example of Reinforcement Learning in action, the Roomba Model 980 uses it to automate the vacuuming of your house.  The 980 transverses the house, identifies obstacles, and remembers which routes work best to clean the house.  It literally builds a map of the house and uses each vacuuming excursion to refine and update that map (see Figure 2). 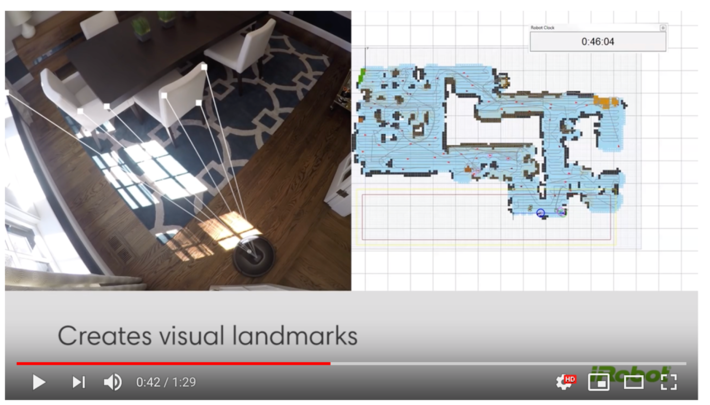 The reinforcement learning powering the Roomba 980 makes the Roomba much more agile and a rapid learner than having to hand code a series of nested “if-then” rules (If “Tumble down stairs”, then “Mark avoid” else “Keep vacuuming”).

Unfortunately, the autonomous Roomba vacuum reminds me of the autonomous lawn mowers from the Jerry Lewis movie “It’s Only Money.” Yea, those things scared the hell out of me when I was a kid (and probably why I’ll never own an autonomous vehicle). “The more intelligent the AI network is, the quicker it is to get aggressive in competitive situations where such aggression will pay off.”

Understanding how Reinforcement Learning works totally explains the behavior of the “Terminator” – it was only doing what its Reinforcement Learning model deemed necessary based upon the codified and articulated sets of rewards and punishment.  I guess that could make things a bit scary…just like those dang autonomous killer lawn mowers in that Jerry Lewis movie.  I guess I won’t be sleeping again tonight…