Object Detection with 10 lines of code

This article was written by Moses Olafenwa.

Getting to use modern object detection methods in applications and systems, as well as building new applications based on these methods is not a straight forward task. Early implementations of object detection involved the use of classical algorithms, like the ones supported in OpenCV, the popular computer vision library. However, these classical algorithms could not achieve enough performance to work under different conditions. 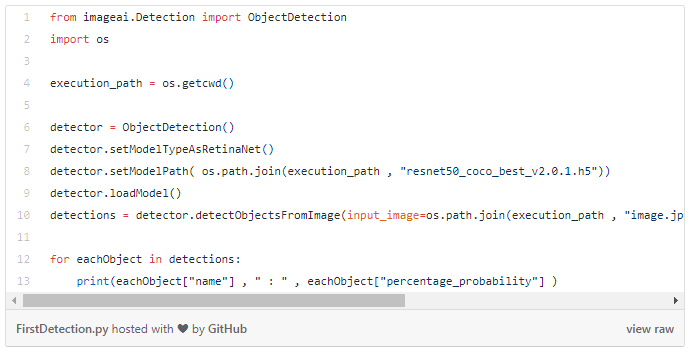 Source for the code: here

The breakthrough and rapid adoption of deep learning in 2012 brought into existence modern and highly accurate object detection algorithms and methods such as R-CNN, Fast-RCNN, Faster-RCNN, RetinaNet and fast yet highly accurate ones like SSD and YOLO. Using these methods and algorithms, based on deep learning which is also based on machine learning require lots of mathematical and deep learning frameworks understanding. There are millions of expert computer programmers and software developers that want to integrate and create new products that uses object detection. But this technology is kept out of their reach due to the extra and complicated path to understanding and making practical use of it.

My team realized this problem months ago, which is why I and John Olafenwa built ImageAI, a python library that lets programmers and software developers easily integrate state-of-the-art computer vision technologies into their existing and new applications, using just few lines of code.

To run the above short code featured in the picture, you need to install the following Pyton libraries, via pip (e.g. “pip install tensorflow”):

Upgrade about “pip3 install imageai”: download the RetinaNet model file that will be used for object detection via this link: https://github.com/OlafenwaMoses/ImageAI/releases/download/1.0/resn…

To read the rest of the article, click here.

Automate Sorting Your Trash With Some Healthy Machine Learning