Nearly 33 Years Later, Nobody Knows What Triggered the Crash of 1987

I opened my first stock trading account shortly after I landed my first full-time job in 1987 – the same year as the great stock market crash – also known as Horrible Monday.  (I renamed Black Monday in keeping with the times.)  I dropped out of university to “find myself.”  It seemed so easy working at an office-supplies retailer: putting supplies in the stockroom; filling the store shelves with merchandise; and handling the cash register.  It all made sense, too.  I didn’t know what I would do with a degree in English or literature.  I had dropped out of both these programs.

Investing also made sense.  I bought shares in companies to earn a return.  Nobody mentioned anything to me about a stock market crash.  But anyways a big one was coming.  I guess with the elevated hormonal levels still lingering in my veins from my teenage years, I can still remember all the details today.

GPT3 and AGI: Beyond the dichotomy – part one

Most Useful C/C++ ML Libraries Every Data Scientist Should Know

I consider it fairly disturbing that nearly 33 years later, nobody has come up with an explanation how or why the crash happened.  I just know that it had the spill-over effect of causing me to return to university – to do a degree in a completely different area – in environmental studies.  My current theory is that stock-market corrections are a normal occurrence meant to facilitate realignment as economies enter different regimes.  There is a thermodynamic equivalent found in relation to natural ecosystems.  Some regimes off the top of my head are as follows:  automobile; automobile-integration; robotics; robotics-integration; computers; computer-integration (that we currently occupy).

In all likelihood, my drive to “save the world” extended from that difficult experience of losing such a large chunk of my savings in the stock market.  It is simply how I responded.  Calamity struck.  Something is wrong.  Save world.  The crash of 1987 created me – in a sense.  It brought about my psychological baseline over which everything else has since been constructed.

Over the last few blogs, I introduced my skipjack trading methodology.  The metrics needed to support skipjack trading occupy a theater spanning three days – four days if I include an instrument called a tracer.  By this I mean that the variables are extracted from three days of trading.  The tracer on the hand predicts a variable found on the fourth day.  Skipjack trading uses an action and effect line.  The tracer has about a 0.7 correlation to the next-day action – to be explained in greater details later in the blog.  I realize all of this is unfamiliar given the lack of documentation.  But I wanted to show readers how the metrics behave using the Dow Jones Industrial Average both before and after the crash of 1987 presented below.  I call the metrics the Levi-Tate (levitate) Group of Technical Metrics.  Ironically, I have been using these metrics primarily to study stock-market corrections.

The “crash” is just to the right-of-middle, I hope readers can see, just around the 181st trading day.  These metrics show that for the most part, they all avoid the zero line; and extremely rarely do they all approach and subsequently fall below the zero line.  So it is a special day indeed when this happens.  Because zero-avoidance is so prevalent, the next chart at 2 days before the crash remains quite threatening.  In my last blog, I introduced the Destroying Angel formation.  Below, I present the Waterfall and Rock formation.  Is it a great time to invest – during something I call a waterfall-and-rock formation?  Of course it is not!  There is a waterfall.  There is a high likelihood of whipsaw from the rock.  Also, hello, there is not a single healthy skipjack anywhere nearby. 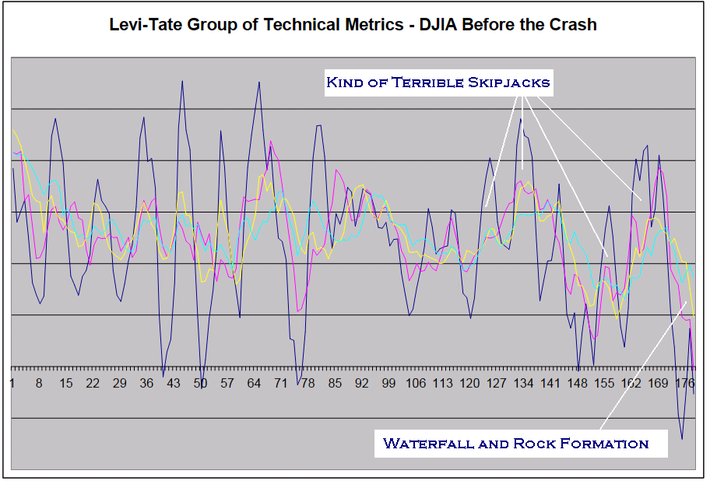 Below I provide the pricing chart for the same period as the preceding.  I know some people are thinking, hey, clearly this is not a good time buy.  Well, no, this is not clear at all.  Some would call this a great buying opportunity.  After all, nobody has quite explained why it wouldn’t be – why pricing support should necessarily collapse.  I excluded the action line and the tracer mostly because I think most readers wouldn’t be able to tolerate the amount of information being provided all at the same time; but for the most part, both of these lines provide advanced warning.  However, neither of them are strongly correlated to the price.  The slower lines – the lines of effect – provide a more reliable indication of price but only within certain formations usually involving the action line. 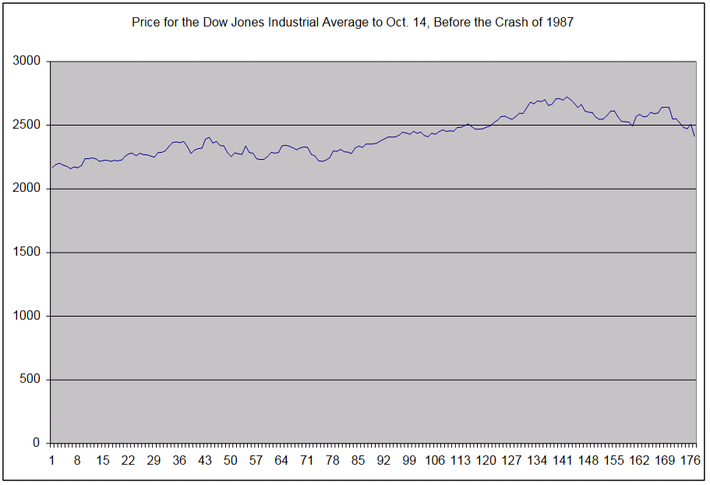 It is quite mysterious how the tracer is well-correlated to the next-day action most of the time.  I already mentioned that the action is not a good indication of price.  But during certain formations such as the skipjack, action strongly influences effect, which can lead to an effect-price correlation near 1.  During a good skipjack, the effect line is rising upward from tail-fin to head – meaning that price should likewise increase.  Well, this is according to the trading model, anyways. 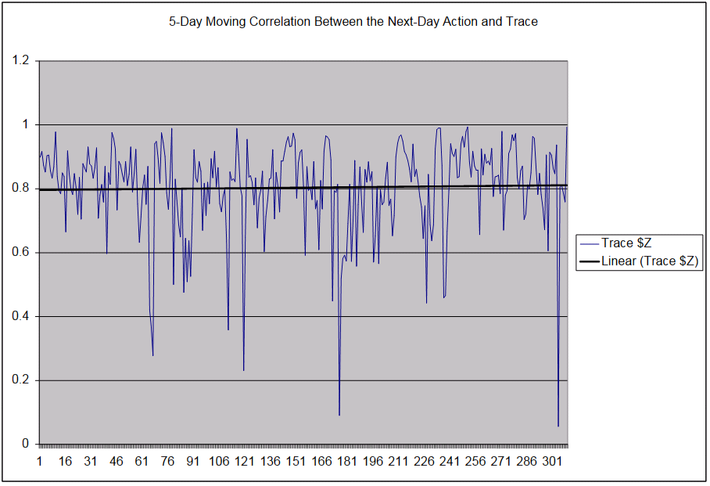 Since there are so many moving parts, I think many people would consider a buy-and-hold strategy much more straightforward.  I can quite honestly say, during a boom period, it would probably be inefficient jumping in and out of the market; and there is a greater risk of missing out on unpredictable leaps in price.  It is certainly not my place to convert people.  (Literally, I am not licenced to give financial advice.)  But I did want to show how the Levi-Tate group of technical metrics appear to have the ability to anticipate corrections.

GPT3 and AGI: Beyond the dichotomy – part one

Most Useful C/C++ ML Libraries Every Data Scientist Should Know

Is BERT Always the Better Cheaper Faster Answer in NLP? Apparently Not.

National Australia Bank will pay you to break its systems

Goldman Calls It: U.S. Economy Is in Grave Danger Without Stimulus