Earlier this month, we reported about a critical unpatched weakness in a wide range of SIM cards, which an unnamed surveillance company has actively been exploiting in the wild to remotely compromise targeted mobile phones just by sending a specially crafted SMS to their phone numbers.

If you can recall, the Simjacker vulnerability resides in a dynamic SIM toolkit, called the S@T Browser, which comes installed on a variety of SIM cards, including eSIM, provided by mobile operators in at least 30 countries.

Now, it turns out that the S@T Browser is not the only dynamic SIM toolkit that contains the Simjacker issue which can be exploited remotely from any part of the world without any authorization—regardless of which handsets or mobile operating systems victims are using.

Following the Simjacker revelation, Lakatos, a researcher at Ginno Security Lab, reached out to The Hacker News earlier this week and revealed that another dynamic SIM toolkit, called Wireless Internet Browser (WIB), can also be exploited in the same way, exposing another set of hundreds of millions of mobile phones users to remote hackers.

Lakatos told The Hacker News that he discovered this vulnerability back in 2015 but decided not to disclose it publicly until now because the process to patch such a flaw is complex and most importantly, can be abused by “bad guys to control phones running vulnerable SIMs remotely.”

Besides this, Lakatos also claimed that he independently discovered S@T Browser as well and also provided a video demonstration of the Simjacker vulnerability with more details that have not yet been published by AdaptiveMobile Security researchers who initially disclosed the issue earlier this month.

WIB toolkit is created and maintained by SmartTrust, one of the leading companies that offer SIM toolkit-based browsing solutions to more than 200 mobile operators worldwide, and, according to some press releases, the list includes AT&T, Claro, Etisalat, KPN, TMobile, Telenor, and Vodafone.

Just like the S@T Browser, WIB toolkit has also been designed to allow mobile carriers to provide some essential services, subscriptions, and value-added services over-the-air to their customers or change core network settings on their devices.

In case you missed it.

SimJacker #vulnerability is concerning because it can be executed:

➡️ against mass audience,
➡️ against devices manufactured by any vendor,
➡️ with just a $10 GSM modem,
➡️ and there’s nothing much affected users can do.

Instead of a pre-fixed installed menu, having a dynamic toolkit on the SIMs allows mobile operators to generate new features and options on the fly based on information provided by a central server.

“OTA is based on client/server architecture where at one end there is an operator back-end system (customer care, billing system, application server…) and at the other end there is a SIM card,” the researcher explained in a blog post.

The flaw in both S@T and WIB Browsers can be exploited to perform several tasks on a targeted device just by sending an SMS containing a specific type of spyware-like code.

How Does SimJacker Attack Work Against WIB or S@T Enabled SIMs?

As practically demonstrated in the video and illustrated in the above diagram that Lakatos shared with The Hacker News, both Simjacker and WIBattack attacks can be summarized in four following steps:

Lakatos says he also reported his findings to the GSM Association (GSMA), a trade body that represents the interests of mobile operators worldwide.

How to Detect Simjacker Attacks? 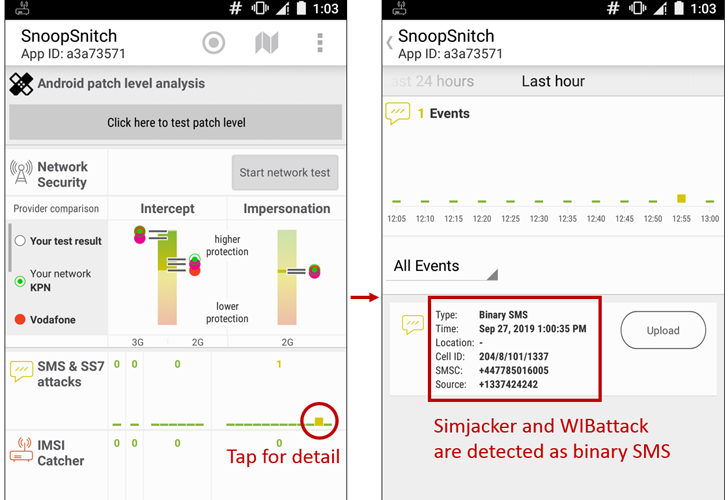 Meanwhile, the researcher also told The Hacker News that he is working on a mobile phone app, to be released soon, that would allow users to scan their SIM cards to detect if it’s vulnerable to Simjacker vulnerability or not.

Developed by researchers at SRLabs, there’s another Android app, called SnoopSnitch, which can detect attacks based on suspicious binary SMS including Simjacker and alert users of it.

You can download SnoopSnitch from Google Play Store, but you need to have a rooted Android smartphone with a Qualcomm chipset for the SMS attack alerting feature to work.

We also reached out to AdaptiveMobile Security firm for a comment but have not heard back from them yet.

Treasury Yields Pull Back from Highs as U.S.-Sino Relations Show Signs of Imploding