Imagine you are a company selling a fast-moving consumer good in the market.

Now, how to find out in which state the customers would be after 6 months?

Markov Chain comes to the rescue!!

Using the above two information, we can predict the next state.

A classic example of Markov Chain is predicting the weather. We have two different weather conditions: Sunny and Rainy. Let’s assume today it is sunny. We have the following probabilities:

Here the initial vector is =

Recollect the Final State = Initial State *Transition Matrix? The above represents the same.

So, what is the inference?

Back to the Problem

Coming back to the problem where we need to know what the state the customer is after 6 months of launching the product.

We can assume there are 4 states in which the customer can be at any point in time.

We have the following information:

So, lets dive into the math part. It would be clearer to see the movements among all 4 states diagrammatically. 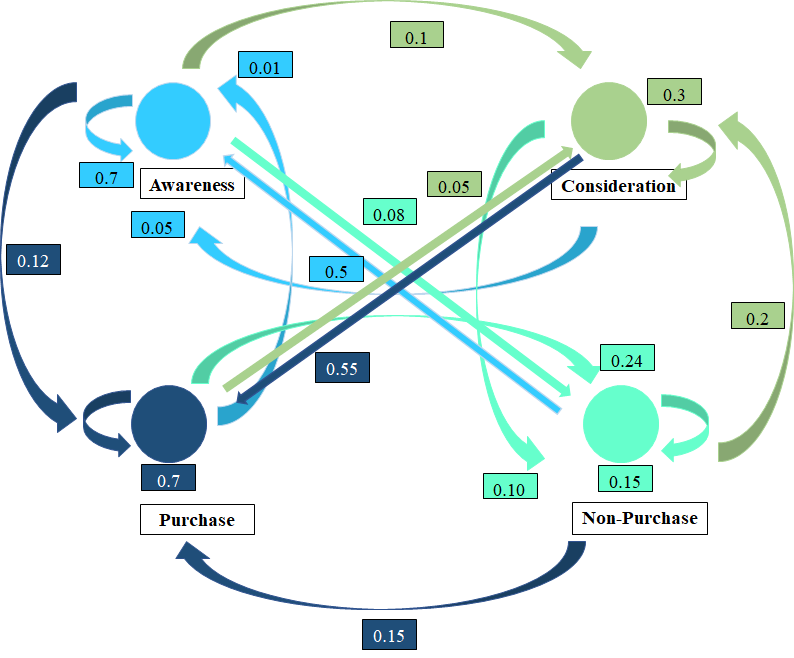 Evaluation of the Result

We can notice that the number of people under ‘Awareness’ and ‘Consideration’ have decreased. This is a good thing because, the people actually shifted from the state of ‘Awareness’ and ‘Consideration’ to the state of ‘Purchase’ (an increase of nearly 34% !!) Also notice that the number of people in ‘No Purchase’ states decreased (a decrease of 11%).

Overall our analysis goes to show that the campaign/ads has worked!!

Markov Chain has many other applications in Marketing Analytics and other fields such as NLP.

Why Big Data And Machine Learning Are Important In Our Society