Who should read this blog:

Linear regression is generally the first step into anyone’s Data Science journey. When you hear the words Linear and Regression,  something like this pops up in your mind:

X1, X2, ..Xn are the independent variables or features. W1, W2…Wn are the weights (learned by the model from the data). Y’ is the model prediction.  For a set of say 1000 points, we have a table with 1000 rows, n columns for X and 1 column for Y. Our model learns the weights W from these 1000 points so that it can predict the dependent variable Y for an unseen point (a point for which Xs are available but not Y)

Epsilon (denoted by e henceforth) is the residual error. It captures the difference between models prediction and the actual value of Y. One thing to remember about e is that it follows a normal distribution with 0 mean.

Is minimized. Why do we square the errors and then add? Two reasons.

Quite often, in the excitement of learning new and advanced models, we usually do not fully explore this model. In this blog, we’ll look at how to analyze and diagnose a linear regression model. This blog is going to be as intuitive as possible. Let’s talk about the model. There are three main assumptions linear regression makes:

Do not worry if you don’t correctly understand the above lines. I am yet to simplify them.

If we fit and plot a linear regression line, we can see that it isn’t a good fit. The MSE (mean squared error) is 0.0102 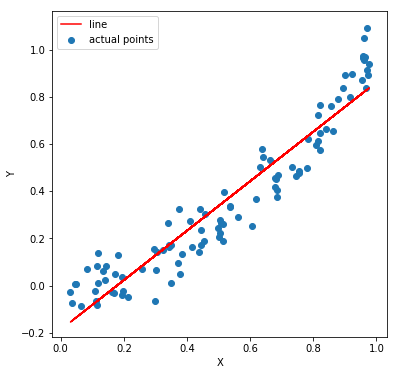 Next, we build the model, generate the predictions and reverse transform it. Take a look at the code and the plots below to get an idea. The MSE here is 0.0053 (almost half the previous one) 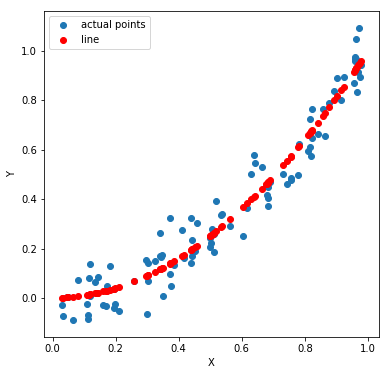 Isn’t is evident which one fits better. I hope it is a bit more clear why linear relationships are needed. Let’s move on to the next assumption.

Formally speaking, we need something called homoscedasticity. In simple terms, it means that the residuals must have constant variance. Let’s visualize this. Later I’ll explain why it is essential. 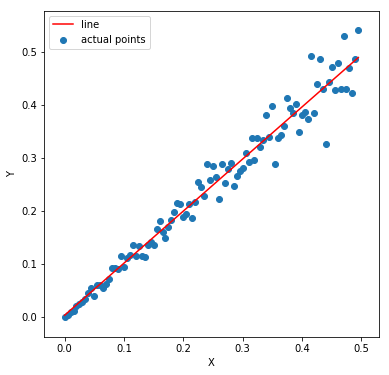 If you notice carefully, the variance among the Y values increases from left to right like a trumpet. Meaning the Y values for lower X values do not vary much concerning the regression line, unlike the ones to the right. We call it heteroscedasticity and is something you want to avoid. Why? Well, if there is a pattern among the residuals, like this one (for the above plot) 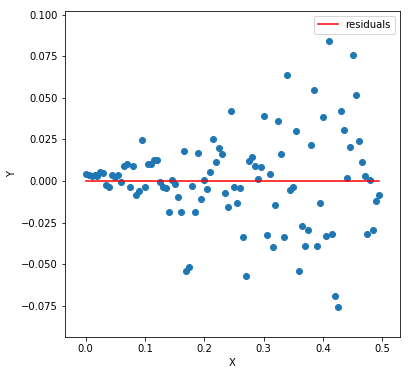 It generally means that the model is too simple for the data. The model is unable to capture all the patterns present in the data. When we achieve homoscedasticity, residuals look something like this. Another reason to avoid heteroscedasticity is to save us from unbias results in significance tests. We’ll look at these tests in details. 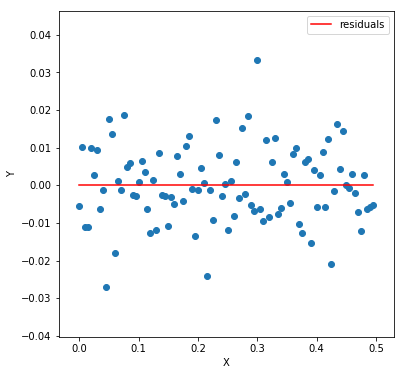 As you can see, the residuals are entirely random. One can hardly see any pattern. Now comes the last and the final assumption.

Sounds similar to the previous one? It kind of does. However, it is a little different. Previously, our residuals had growing variance but there we still independent. One residual did not have anything to do with the other. Here, we analyze what if one residual error has some dependency with the other. Consider the following plot whose data is generated by Y = X + noise (random number). Now, this noise accumulates over different values of X. Meaning noise for an X is a random number + the noise of the previous noise. We deliberately introduce this additive noise for the sake of our experiment. 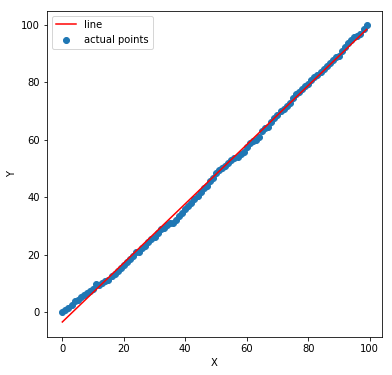 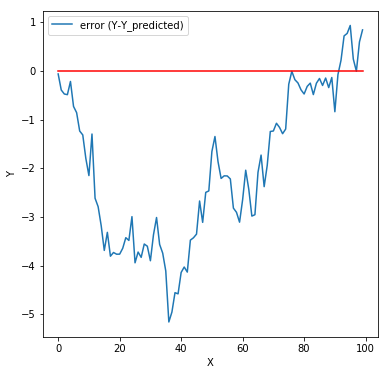 In our example, it turns out to be 0.945 which indicates some dependency. Now, why do we need errors to be independent? Again, this means the linear model fails to capture complex patterns in the data. Such type of patterns may frequently occur in time series data (where X is time, and Y is a property that varies with time. Stock prices for instance). The unaccounted patterns here could be some seasonality or trends.

I hope the three assumptions are a bit clear. Now how do we evaluate our model? Let’s take a look at some metrics.

Previously, we defined MSE to calculate the errors committed by the model. However, if I tell you that for some data and some model the MSE is 23.223. Is this information alone enough to say something about the quality of our fit? How do we know if it’s the best our model can do? We need some benchmark to evaluate our model against. Hence, we have a metric called R squared (R^2).

Let’s get the terms right. We know MSE. However, what is TSE or Total Squared Error? Suppose we had no X. We have Y, and we asked to model a line to fit these Y values such that the MSE minimizes. Since we have no X, our line would be of the form Y’ = a, where a is a constant. If we substitute Y’ for a in the MSE equation, and minimize it by differentiating with respect to a and set equal to zero, it turns out that  a = mean(Y)  gives the least error. Think about this – the line Y’ = a can be understood as the baseline model for our data. Addition of any independent variable X improves our model. Our model cannot be worse than this baseline model. If our X didn’t help to improve the model, it’s weight or coefficients would be 0 during MSE minimization. This baseline model provides a reference point. Now come back to R squared and take a look at the expression. If our model with all the X and all the Y produces an error same as the baseline model (TSE), R squared = 1-1 = 0. This is the worst case. On the opposite, if MSE =0, R squared = 1 which is the best case scenario.

Now, if this garbage variable is helping minimize MSE, it’s weight or coefficient is non zero. If it isn’t, the weight is zero. If so, we get back the previous model. We can conclude that adding new independent variable at worst does nothing. It won’t degrade the model R squared. So if I keep adding new variables, I should get a better R squared. And I will. However, it doesn’t make sense. Those features aren’t reliable. Suppose if those set of random numbers were some other set of random numbers, our weights would change. You see, it is all up to chance. Remember that we have a sample of data points on which we build a model. It needs to be robust to new data points out of the sample. That’s why we introduce something called adjusted R squared. Adjusted R squared penalizes any addition of independent variables that do not add a significant improvement to the model. You usually use this metric to compare models after the addition of new features.

So now we know something about linear regression. We dive deeper in the second part of the blog. In the next blog, we look at regularization and assessment of coefficients.