In my previous posts, I discussed some E-R diagram basics and some common mistakes to avoid. In this post, I’ll cover cardinality and participation. Cardinality is a count of the number of times one entity can (or must) be associated with each occurrence of another entity. Participation refers to whether an entity must participate in a relationship with another entity to exist.

In general, cardinality tells you “How many”. Cardinality can be:

Participation can be total or partial (optional):

How to Show Cardinality and Participationon an E-R Diagram

While there are many ways to create E-R diagrams, a straightforward way is to create a rough draft of your ERD first, then tackle cardinality. While most methodologies (e.g., Chen, I.E, min/max) use the same shapes for entities (rectangles) and relationships (diamonds), when it comes to cardinality each has its own specific notation. This is where you must make a choice about what methodology to use, as you must stay consistent when building cardinality constraints.

With the “Look-Here” cardinality constraint, you’re literally looking “here” (i.e. next to) the entity to determine cardinality. 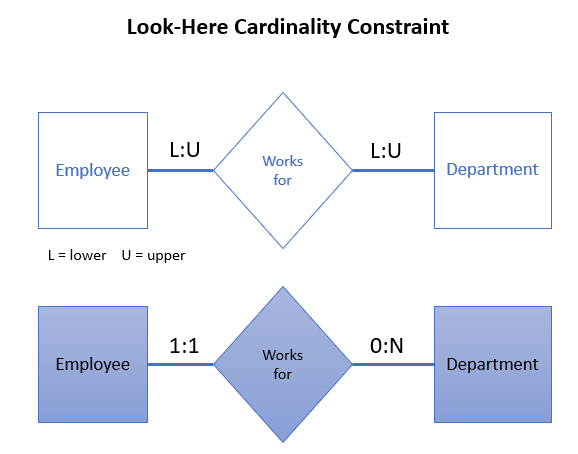 In the above example using the min/max method, the upper bound cardinality constraint 1 states that each employee may have the relationship “work for” at most 1 time, meaning they can only work for one department. The lower bound cardinality constraint 1 states that each employee must have at least 1 appearance in the “works for” relationship. On the other hand, there are no restrictions on how many employees a department may have; the upper bound N indicated no limit [2].

With the “Look-Across” constraint, you must look to the other side of the relationship to garner meaning:

The following examples all show how different methodologies show cardinality and participation: Crowsfeet is one of the most popular methods for creating E-R diagrams. With crowsfeet notation, cardinality is represented by decorations on the ends of lines.

A cardinality of one is represented by a straight line perpendicular to the relationship line.

The IE method is very similar to crowsfeet but does not show attributes related to a relationship: the relationship is depicted as a named line between two entities. Cardinality and participation constraints are combined into min/max (bar and crowfoot) notation. Cardinality is shown as follows [1]:

Your choice of which methodology to use is probably going to be determined by your company’s preference (or perhaps your instructor’s). Unfortunately, differences between notations make the diagrams challenging to transfer from one format to another [1].

[1] A Comparative Analysis of Entity-Relationship Diagrams1