This is the second part of my article Spectacular Visualization: The Eye of the Riemann Zeta Function, focusing on the most infamous unsolved mathematical conjecture, one that has a $1 million dollar price attached to it. I used the word deep not in the sense of deep neural networks, but because the implications of these visualizations have deep consequences on how to solve this conjecture, opening a new path of attack and featuring non-standard generalizations leading to new perspectives and new approaches so solve RH (as the conjecture is called in mathematical circles).

This work is mostly based on data science, and the results presented here are experimental in nature and still need to be proved formally. The main visualization featuring 6 scatterplots is published here for the first time: it shows the orbits of 3 Riemann-like functions, their eyes, and their surprising ring-shaped error distribution when only the first few hundred terms are used in the series defining these functions. It deviates from classical pure-math approaches in the sense that what I do looks more like stochastic dynamical systems, attractors, wavelets, and should appeal to data analysts, engineers and physicists.

The problem is so popular that there are YouTube videos about it, some having gathered several million of views. One of them is also featured here. My own scatterplots show the behavior of a new class of Riemann-like functions, as well as interesting slices of the orbit that are rarely (if ever) displayed in the literature, revealing peculiar features that could help in solving RH.

The main picture in this article consists of the 6 plots below. Click on the picture to zoom in.

I explain later in this section what they represent. But first, I need to introduce some material. Let

The novelty in my method is the introduction of a periodic wave function W in the definition of ϕ, thus generalizing RH in a way different from what other mathematicians did, that is, without using complicated L-functions. This offers more hopes to solve Riemann’s conjecture (RH), by first trying to prove it for the easiest W, and understand what those W‘s having an RH attached to them (as opposed to those that do not) have in common.

Figure 1 (upper part) displays the spectacular orbits for three different waves (cosine, triangular and alternating-quadratic) in the test case σ = 0.75 and 0  <  t  <  600, with the hole around the origin (I call it the eye) being the hallmark of RH behavior: that is, no root for that particular value of σ, regardless of t, because of the hole. Though not displayed here, in the case σ = 0.5, the hole is entirely gone and corresponds to the critical line (the name given by mathematicians) where all the zeroes are found.

The orbit consists, for a fixed σ, of the points (X(t),Y(t)) with X(t) = ϕ1(σ, t) and Y(t) = ϕ2(σ, t). The bottom three plots represent the error between the true value (X(t),Y(t)) and its approximation based on using only the first 200 terms in the series that defines ϕ. The error distribution is very surprising; I was expecting the points to be radially but randomly distributed around the origin; instead, they are located on a ring. Note that for t  >  600 (and for the triangular wave, for t  >  80) you need to use more than 200 terms for the pattern to remain strong.

The wave W is a continuous periodic function of period 2π, with one minimum equal to −1 and one maximum equal to +1 in the interval [0,2π], and the area below the X-axis equal to the area above the X-axis. It must have some symmetry. The waves used here are defined as follows:

2. Other interesting visualizations and source code

The orbit for the standard RH case has been published countless time for σ = 0.5. In that case, there is no eye as the orbit crosses the origin infinitely many times. Some videos about the orbit trajectory have been posted on You Tube and viewed millions of times. Below is one of them. 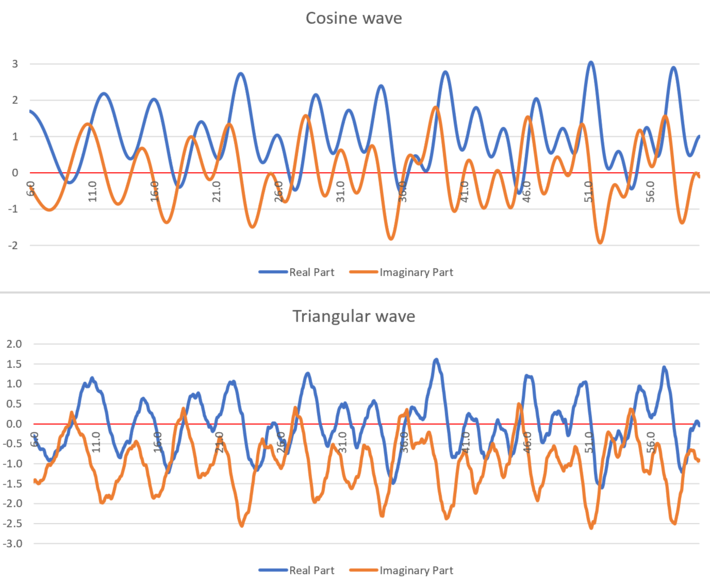 It is interesting to notes that the peaks and valley floors of the triangular and cosine wave frameworks seem to be correlated, occurring at similar times. What’s more, for the cosine wave, when a zero of the blue curve is close to a zero of the orange curve (that is then these curves cross the X-axis at a similar time), the zero of the orange curve occurs first. This seems to be true too for the triangular wave, at least when t  <  600.

The Perl source code is available here. Note that converge is very slow, as discussed in my previous article.

Cybersecurity: Victims are spotting cyber attacks much more quickly – but there’s a catch