But Digital Transformation is something bigger, harder, and much more valuable:

Digital Transformation is about predicting what’s likely to happen, prescribing recommended actions and continuously-learning and adapting (autonomous) faster than your competition. 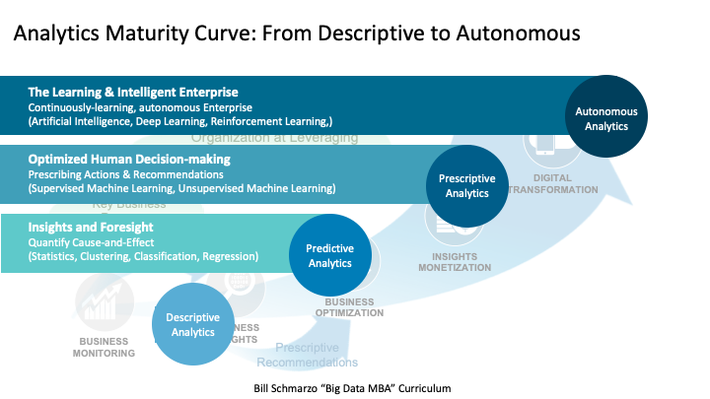 This Analytics Maturation Curve provides a guide to help organizations transition through the three levels of analytics maturity—from reporting to autonomous:

Okay, I have certainly beaten this topic to death, but it bears repeating because it is such a game changer for any organization that sells products (or products as a service).  Tesla is exploiting its ever-growing body of operational and driving data to continuously train the autonomous Tesla Artificial Intelligence-based Full Self-Driving (FSD) brain powers the Tesla semi-autonomous car.  Tesla mines this data to uncover and codify operator, product, and operational insights then get propagated back to each individual car resulting in continuously-refining and adapting capabilities such passing cars on the highway, navigating to the off ramp, maneuvering around traffic accidents and debris on the roads, and parking. 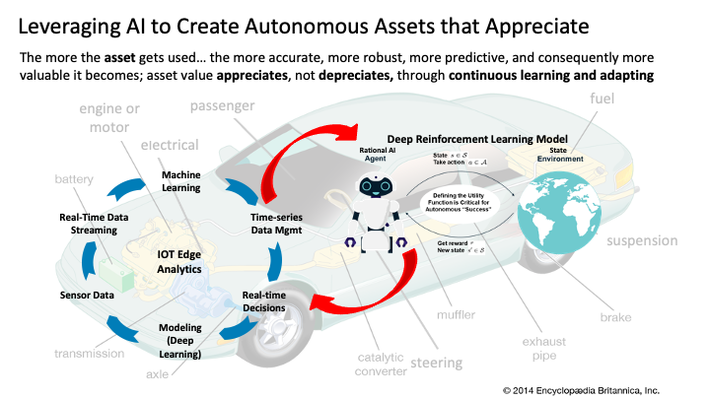 As operations become more complicated and more real-time, it’s becoming harder for organizations to ensure that their operating policies and procedures are evolving as fast as their business and operating environments. Digitalization provides a golden opportunity to improve operational effectiveness by replacing human-centric analog tasks with digital capabilities. That not only reduces human time and expense but allows organizations to capture more real-time, granular data about customer usage patterns and product performance characteristics. Using AI, we can transition from static policies to autonomous policies that learn how to map any given situation (or state) to an action to reach a desired goal or objective with minimal human intervention. These autonomous policies would dynamically learn and update in response to constantly changing environmental factors (such as changes in weather patterns, economic conditions, price of commodities, trade and deficit balances, global GDP growth, student debt levels, fashion trends, Cubs winning the World Series, etc.).

Autonomous policies and procedures not only can ensure that the organization is making informed business and operational decisions, but can also combat bias, prejudice, and discrimination in making decisions. For example, Malcolm Gladwell’s “Talking to Strangers” highlights how AI-informed decisions can lead to equitable decisions in the judicial system.

Economist Sendhil Mullainathan examined 554,689 bail hearings conducted by judges in New York City between 2008 and 2013. Of the more than 400,000 people released, over 40% either failed to appear at their subsequent trials or were arrested for another crime. Mullainathan applied an ML program to the raw data available to the judges and the computer made decisions on whom to detain or release that would have resulted in 25% fewer crimes.

Transitioning from Descriptive to Autonomous analytics is a game-changer but must be framed against the Data & Analytics Business Maturity Index to help organizations become more effective at leveraging data and analytics to power their business (Figure 4). 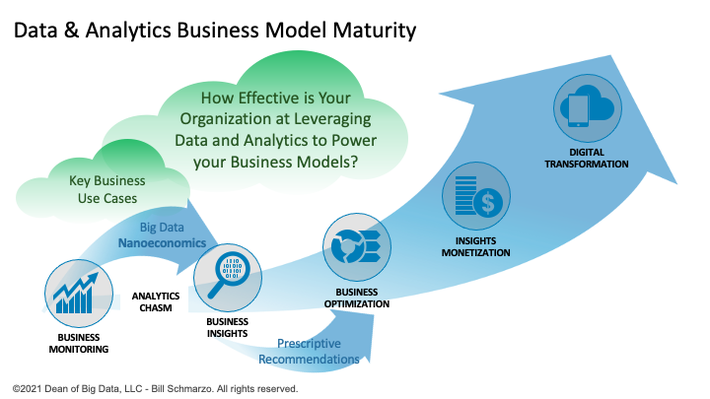 By the way, Jeff Frick does a marvelous job grilling me on the 8 Laws of Digital Transformation.  The video is a lot more interesting than this blog. Grab some Cap’n Crunch and enjoy the conversation!